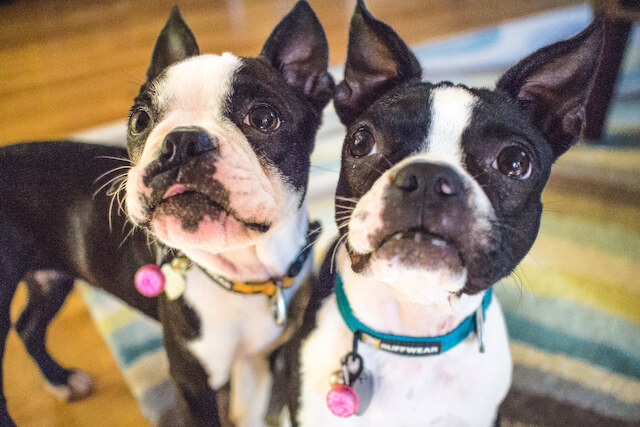 I’m on a list with a breeder for puppy number three. I’ve been on said list for a while because the next addition to our house needs to be a male show prospect.

So while I wait I’ve been collecting dog names.

For example, would I name my next dog Porkchop, Ratchet or Sparkplug?

How We Selected Maggie’s Name

I currently have two Boston Terriers.

And when before we decide on a name, Dog Dad and I describe to each other what personality the dog might have.

When we met Maggie she was five weeks old. And we had to wait three more weeks before she came home.

Somehow, she felt like a sensible and solid puppy who has old fashioned values. At the time our friend was getting married in the south. And she ended up with the name of Magnolia Grace … or Maggie for short.

How We Selected Orbit’s Name

I always knew I was going to add a second Boston Terrier to our family. We waited a long time but eventually a referral came up.

We knew that this younger sister would be a tomboy. A brat. Spicy and sassy and marches to the beat of her own drum.

As with Maggie we started to write down all of the possible names in a book that was on the kitchen counter. We would write down whatever name struck our fancy.

We also had blackball capability and we could cross off any name that neither of us liked while whittling the list down to the short three possible candidates.

And then one day my boyfriend said… you know I like space. So he wrote down Orbit.

I knew that Maggie was going to be a great older sister. And as soon as he wrote down Orbit I thought her full name would be “Love You To The Moon and Back” aka Orbit.

Two years ago I put my name down on a list to get puppy number three. He’s going to be a boy this time and a show prospect.

This puppy seems to be on his own time schedule … he hasn’t been born yet but that’s ok because we’re spending our time focusing on raising our two goobers, Maggie and Orbit.

But we’re also starting to toy with what his name might be.

I’ve been grazing through the dog books on social and writing down all the names I love.

And I’ve got hundreds of names written down but this particular list to share is one with all the oddball weird names. A lot seem to be influenced by food while others are just random who knows what inspired it silly dog names.

So in alphabetical order I present to you, real live names of dogs (male or female) that are so weird that this list is guaranteed to make you laugh or at least chuckle.

I definitely want our third Boston Terrier to have a remarkably funny name. At this time we haven’t picked what that might be because we don’t even know when this little sparkplug might be coming home.

In the meantime I’ll continue to make my lists and get ready for his arrival.

DID YOU LIKE THIS ARTICLE? HERE ARE A FEW MORE TO READ ON THE BLOG:

HOW TO GET READY FOR A BOSTON TERRIER PUPPY

Hello my name is Hannah and I dance with my dogs.  A self proclaimed Boston Terrier addict, (aka breed advocate) I started this blog because there isn’t enough space to write on our Instagram.

I also want to help Boston Terriers parents to learn as much as they can about this breed so they can raise their dogs responsibly.

I spent twenty years in the resort hospitality business.  At the peak of my sales & marketing career I had twenty six resorts under me.  I got tired of traveling and decided to work for myself.

I have two dogs.  Maggie is my socially awkward one; which I find highly relatable because I am completely out of place in large groups myself.  And Orbit is my sensitive flower.  Blow on her skin wrong (ok I might be exaggerating) and she breaks out in a rash.