9 Things You Didn’t Know About DOGTV 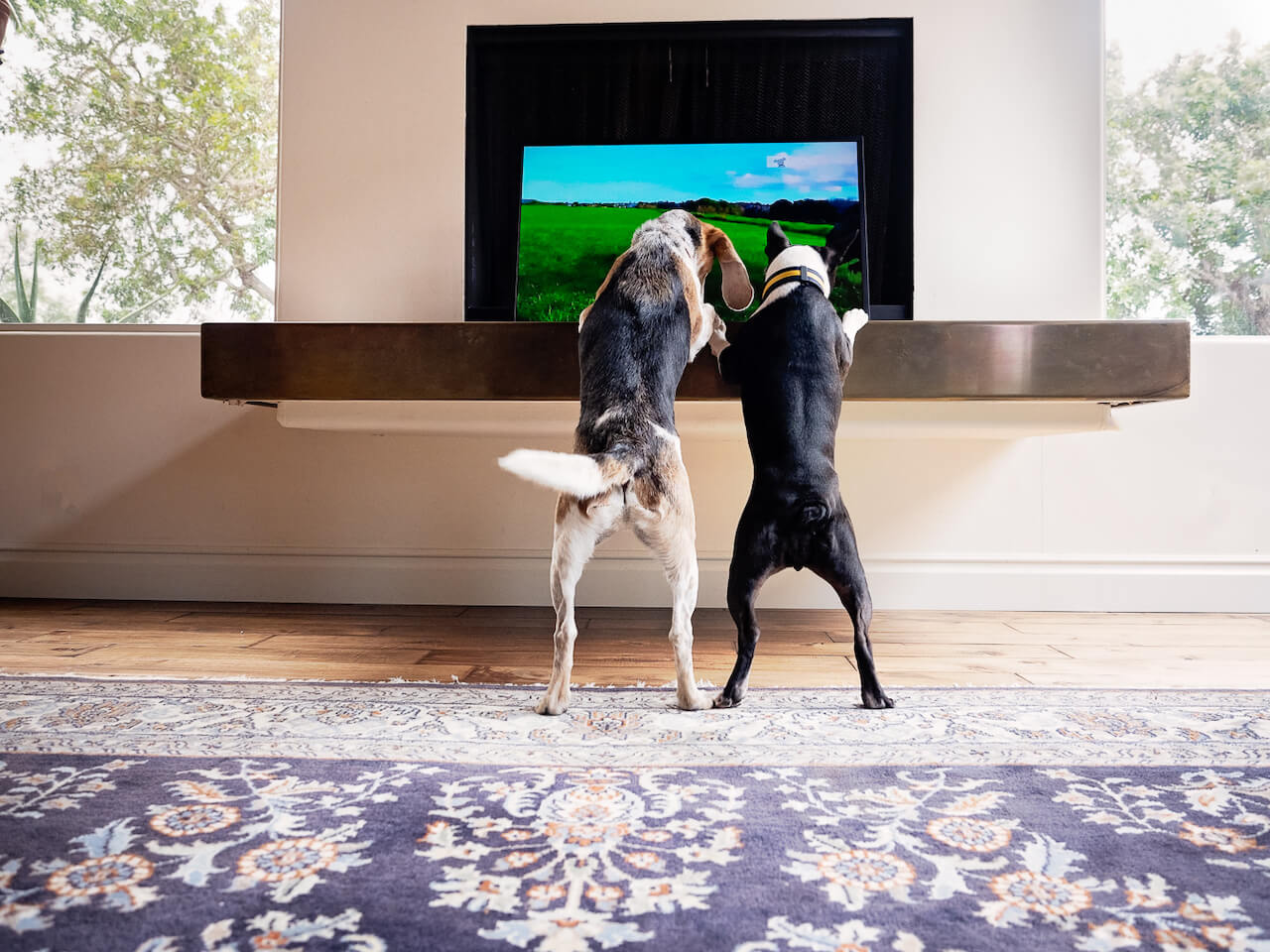 If children can have Disney Plus then Dogs can have DOGTV.

And if you already have a Furbo aka Digital Nanny or PetCube or PetChatz then this is the perfect thing to pair with your dog cam.

1. Your Dog Won’t Binge Like You Do But They Will Watch It

The biggest misconception is that your dog is going to settle down and watch DOGTV just like you watch Netflix.

That’s not going to happen.

They can’t sit and watch the TV for hours like you do.

But … certain shows will capture their attention and they will watch and yes… even interact with the TV.

Some dogs take to DOGTV like fish to water. But some dogs need an “orientation”. You’ll get a 5 day challenge emailed to you when you sign up which guides on how to maximize your dog’s experience with DOGTV.

I’ve been part of the DOGTV team for two years now and I can testify to hundreds of dogs that are glued to their shows.

If you want to see for yourself – enjoy this compilation of dogs watching TV!

2. It’s Better Than Leaving the TV On Some Random Station

There are two types of dog people.

First: There’s the “dog owner” – the one that attends to their dog’s basic needs. Food, shelter, a warm bed and a sofa to sleep on.

Second: There’s the “dog parent” – the one who’s day involves their dog. The one that has a dog cam, takes their dog’s to the beach or park, and yes of course they bring their dog on every vacation.

If you’re more the “dog parent” type – then you also probably have a doggy cam and/or worry about how your dog might feel when they are home alone.

All alone.. within nothing to do.

So you might set up a nice place for them to sleep while you’e gone (preferably within the doggy cam’s sight) and you run your errands efficiently so you can return back to your fur baby as soon as possible.

You might even leave the radio or tv on while you’re gone.

If you leave on any animal channel or news channel, your dog might see something scary like a crocodile or a bomb somewhere thats on the news.

That’s where DOGTV comes in. The shows are what dogs like to watch. They won’t have anything that triggers them or stresses them out.

Because just like kids love Disney Plus. Dogs LOVE DOGTV.

That leads me to the “role” DOGTV plays in my house. It’s the digital companion to go with their digital nanny (their Furbo).

The shows are short (one to three minutes in length) and they will either relax your dog (hello nap time) or capture their attention (hello squirrels and things).

4. Their Shows Are Short

The reason DOGTV’s shows are short is not by some random decision made from the producer’s office.

When DOGTV was designed they set up rooms with multiple cameras. They tracked the dog’s eye movements and reactions.

DOGTV figured out that having short programs that varied in style, ensured that it would first lull your dog into a nice nap (I mean you don’t need them chewing on your furniture right?) and then spark their attention to get them up and interact or at least notice what’s on TV.

And yes. There are squirrels. But not the type to drive them crazy. Just a few squirrels casually adventuring on a log and through out their tree home.

And it’s shot in a Nat Geo-ish – type of feel so it’s relaxing yet intriguing all at the same time.

6. The Soundtrack Is For Dogs

Can you imagine your Linked In profile right now saying “Sound engineer for dogs” or “Dog Musician”.

Because YES DOGTV has a team of musicians that write and create music JUST FOR DOGS. You an even get a sample of it on SPOTIFY. It’s the relaxation track – great for long road trips when you want your dog to nap between destinations.

Some soundtracks have fun whirls and chirps not because that’s a new musical style but because it’s music meant to put a pep in your dog’s step and get them up and looking at the TV.

7. The Colors Are Weird

When you first turn on DOGTV (use my referral link) you might think the colors are off.

Don’t fret – no need to adjust your TV. That’s what it’s meant to look like.

And this wasn’t by random weird edit. It’s backed by science.

An important part of the production process after filming is coloring each show to ensure that it’s in the spectrum your dogs can see.

8. Originally It Was Supposed To Be CATTV

Fun fact. Originally DOGTV was going to be for cats.

It was inspired by Charlie (DOGTV’s inventor’s cat) but they knew dogs would take better to it; they originally planned to call it PETTV (to include both cats + dogs), but then after realizing dogs would benefit the most they decided to market only to dogs.

Let’s face it. Regular TV is a dumpster fire. You’re either watching the news or some lackluster show while you wait for your next Netflix series to come out.

The longest I ever watched DOGTV was six hours.

OK maybe I wasn’t watching every minute …. But one day I came home after a long day and sat down with my two Maggie and Orbit …. And DOGTV was still on from while I was gone.

I found myself not switching the channel. The music was relaxing and the shows were too.

Sprinkled in between the squirrels and the cute videos are some nice travel “around the world” dog shows.

I ended up leaving the TV on till I went to bed as I read my book.

I guess DOGTV works for me too.

Hello my name is Hannah and I dance with my dogs.  A self proclaimed Boston Terrier addict, (aka breed advocate) I started this blog because there isn’t enough space to write on our Instagram.

I also want to help Boston Terriers learn as much as they can about this breed so they can raise their dogs responsibly.

I spent twenty years in the resort hospitality business.  At the peak of my sales & marketing career I had twenty six resorts under me.  I got tired of traveling and decided to work for myself.

I have two dogs.  Maggie is my socially awkward one; which I find highly relatable because I am completely out of place in large groups myself.  And Orbit is my sensitive flower.  Blow on her skin wrong (ok I might be exaggerating) and she breaks out in a rash.

14 Amazing Black Friday Deals for Dog Lovers in 2020 November 27, 2020
Shampoo To Reduce Shedding For Your Smooth Coat Dogs October 19, 2020
The Latest In Joint, Cognitive and Anxiety Supplements For Your Dog August 29, 2020
Leave a Reply Cancel reply