Are Boston Terriers Aggressive Dogs? Not At All! 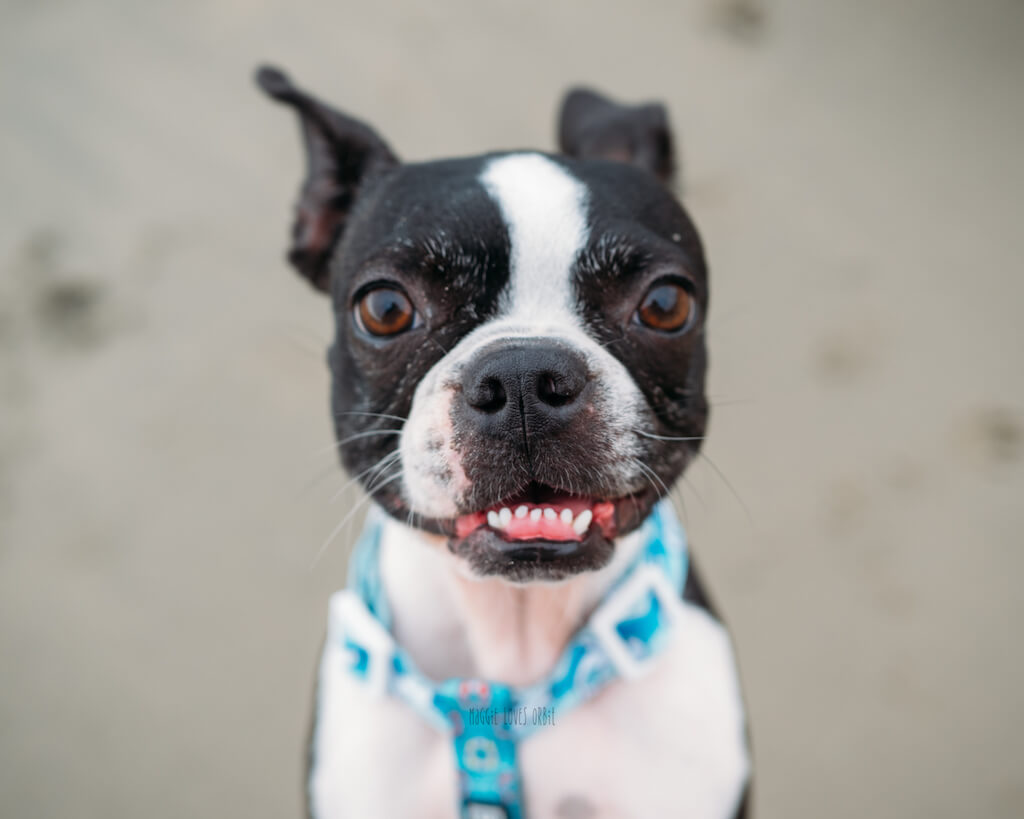 Ever seen a dog that woke up and got into a fight for no apparent reason?

Probably not because dogs are not wired to be mean and aggressive.

Dogs are wired to be sweet and loving.  Especially Boston Terriers who are bred to be companion dogs.

However… sometimes … when you learn the back story of a dog you’ll learn they went through some life event or lack communication skills which … makes them awkward communicators that occasionally get into trouble.

However, some potential or current Boston Terrier owners wonder about the temperament of these dogs.

I’ll explore this topic further in the sections below, including information on what to do if you happen to find yourself with what is labeled to be aggression.

Because it’s probably just fear and you have to learn how to help your dog cope.

What Were They Bred For?

Every dog has traits that are innate. Herding dogs love to herd and protect livestock. Sporting dogs excel in hunting and fishing.

Boston Terriers belong to the Non-sporting dogs group because they are bred for something other than sports.

In the case of the Boston Terrier they were bred to be companion dogs. They people pleasers and excel in keeping their owners company.

The Boston Terrier has a sweet, charming personality, quiet, restful demeanor, and an intense love of his owner and home.

The Boston Terrier doesn’t wander far. And you won’t find him quarreling with other dogs.

They are full of character and affectionate. Well bred Bostons have a gentle and even temperament.

Background of a Boston Terrier

“The question is often asked, “How did the Boston Terrier originate?” Briefly stated it may be said to have resulted from a cross between the English Bulldog and the white English Terrier, and then to have been considerably inbred. Incidental peculiarities of the first dogs used as sires are partly responsible for the present type.

…Mr. Robert C. Hooper, of Boston came into possession of a dog named Judge. This dog, which he purchased of Mr. William O’Brien of the same city, was undoubtedly imported from England. Judge, commonly known as Hooper’s Judge, was destined to be the ancestor of almost all the true modern Boston Terriers.

He was a cross between an English Bulldog and a white English Terrier.

He was a strongly built, high stationed dog of about thirty-two pounds weight. In color he was a dark brindle, with a white stripe in the face. His head was square and blocky, and he resembled the present Boston Terrier in that he had a nearly even mouth.

Judge was bred to Burnett’s Gyp (or Kate). Gyp was a white bitch, owned by Mr. Edward Burnett, of Southboro, MA.

She was of about twenty pounds weight, had a fine three-quarter tail, and was quite low stationed. She was of stocky build, showing considerable strength in her make-up. Her head was good, being short and blocky.

This dog was of strong build, and like his dam was low stationed. His weight was about twenty-eight pounds. He was of dark brindle color, even white markings, and like Judge, had a nearly even mouth.

…Eph was mated with Tobin’s Kate. This bitch was of small size, weighing only twenty pounds. She had a fairly short head, was of golden brindle color, and had a straight three-quarter tail.”

The Boston Terrier Club Of America was organized in 1891 and so at the time of this article the club is 129 years old.

Can Boston Terriers Be Aggressive?

A well bred Boston Terrier that has been raised and socialized properly is generally a happy dog. Aggression is not a characteristic of this breed.

The early breeding books attests to the fact that breeding for a well mannered dog was favored.

But … just like in any breed … a dog “CAN” become aggressive due to a variety of factors.

So the true question isn’t if the Boston Terrier is aggressive but “can” they be aggressive? And the short answer is a small percentage “can” be

What Causes Aggression or Reactivity

Aggression or Reactivity is often mischaracterized. Dogs do not wake up and envision getting into a quarrel or fight with other dogs.

These dogs feel uncertain about something and their reactivity or aggression is an information seeking strategy coupled with poor communication skills.

When a reactive dogs rushes towards something or another dog, barking lunging and growling, he is attempting in his mind to underwent the threat of any given situation.

It could be that his communication strategy is “I barked at this unknown thing and it went away”.

Reactive dogs are anxious and this is how they respond because they are having a panic attack.

What If You Find Your Boston Terrier Suddenly Aggressive or Reactive?

Just like humans dogs can have distinct and individual personalities.

Some dogs are grumpier. Some dogs let things roll off their back. This is completely normal for either end of the spectrum.

The good news is that it is extremely rare to come across an aggressive Boston Terrier.

What you probably have is a dog that doesn’t know how to clearly communicate or has a higher level than anxiety and these are both manageable and trainable.

An aggressive or reactive Boston Terrier is frightened. They don’t understand what is going on and so internally they are freaking out.

Coupled with the wrong communication skills and an owner who might not understand what is going on …. doesn’t help the puppy move forward.

But with proper training you can help build your puppy’s confidence and give them the tools they need to cope.

If you’re reading this prior to picking out your puppy it’s important for you to work with a reputable, ethical and preservationist breeder who breeds for disposition as well as health and conformation. To learn more you can read this article

What Type of Training Is Best

Boston Terriers are highly attuned to the moods and emotions of their owners. A clear and gentle approach works best.

Positive training methods should be used when raising or training your Boston Terrier Puppy.

Aggression or reactivity is not permanent and the good news is that with proper time and dedication you can rehabilitate what might be labeled as a reactive or aggressive dog.

Get A Professional Behaviorist

Obedience training is best received from a dog trainer.

Behavior issues are best addressed by an animal behaviorist.

What An Aggressive or Reactive Boston Terrier Needs the Most

Clear structures are necessary for anxious dogs. They need to know what is going to happen next and they need to feel safe.

Creating certainty in their day through a predictable schedule makes them happy.

Most of all teaching your anxious dog how to relax will be the foundation to his or her rehabilitation.

My own dog was attacked and became fearful of other dogs.  When they get too close she lashes out because she’s afraid of them and trying to make them go away.

It’s been a year since I realized she needed rehabilitation and you can read her story HERE.

Understand It Will Take Time

If you happen to have a fearful, anxious, reactive or aggressive Boston Terrier, please note that rehabilitating him or her will take time. It might even take years.

Often times we think that taking a class will fix all the issues.

When in actuality behavior modification only happens over an extended period of time.

So, are Boston Terriers aggressive?

But “can” Boston Terriers be aggressive? Well, then yes a small percentage “can”.

It’s up to the owner to select a puppy from the best reputable breeder they can find.

And then once the puppy is in your home, up to you to learn how to raise, train and socialize your puppy so that it is a balanced and well mannered dog.

You can rest assured that Boston Terriers by nature are kind and fun loving dogs that will bring comic relief to their family for years to come.

If you would like to know more be sure to visit the links below.

The Boston Terrier and All About It – Edward Axtell

Bones Would Rain From The Sky

The Boston Terrier Club of America

You won’t read about cats here… but you will get a fairly large dosage of articles dedicated to the Boston Terrier to help you learn more about the breed or provide practical tips as you raise your own.    Read more about us.

11 Reasons Not To Get A Boston Terrier if You Live In An Apartment September 9, 2020
10 Reasons Why Your Boston Terrier Loves To Lick You September 8, 2020
New Dog Guide - 63 Ways to be a Responsible Boston Terrier Owner August 27, 2020
1 Comment
Leave a Reply Cancel reply

Hi, we're Maggie and Orbit
We envision reaching every Boston Terrier parent before they get their first puppy or dog and be their go to resource as their raise their dogs.We’re on a mission to equip pet parents the information they need to better raise Boston Terriers.