Are Boston Terriers Born With or Without Tails? 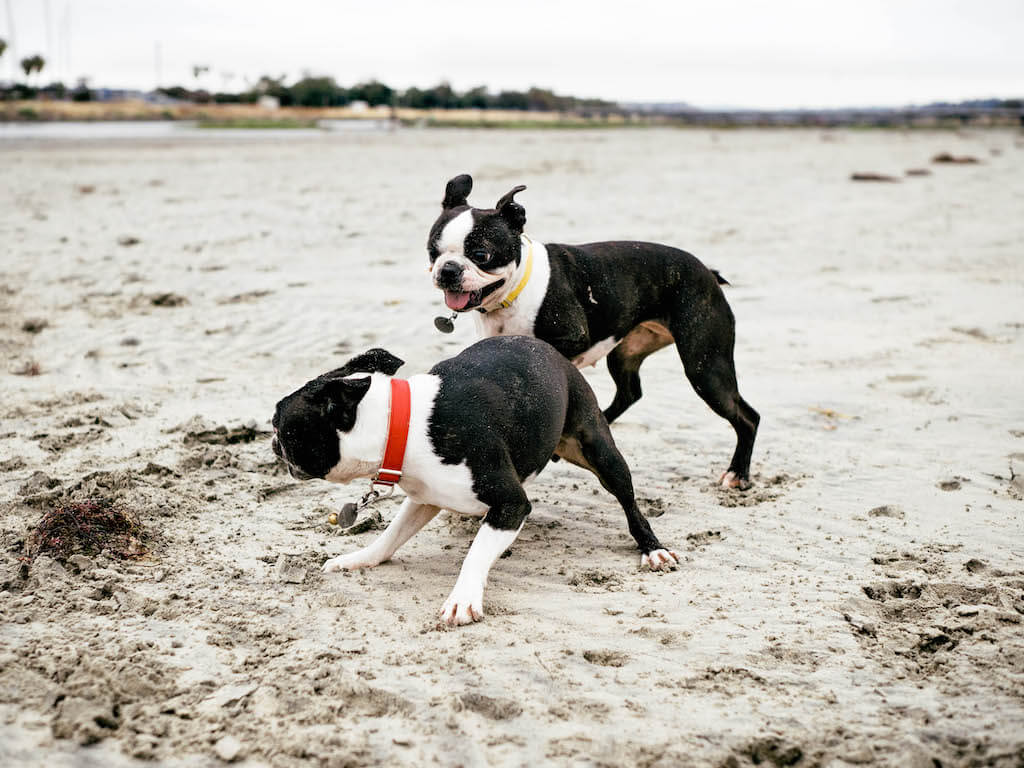 I was playing with Zoey my first Boston Terrier back in 2010 when I noticed she had a very short nub of a tail that didn’t wag.

Instead her whole back end would wiggle when she was excited.

Later that night after I put her to bed I looked up if Boston Terriers were born with or without a tail?  I was relieved to read that:

Boston Terriers are born with naturally short tails due to a mutated gene that causes the tail to grow unusually short.

Somehow this made me feel better. The thought of Zoey’s tail being lopped short disturbed me and I was glad Boston Terrier’s tails were not docked.

Boston Terriers Are Born With a Natural Bobtail

According to Wikipedia, a *natural bobtail* is a dog’s tail which due to a mutated  gene which means the tail grows unusually short or is missing completely. The genes for the shortened tail may be dominant or recessive.

This condition is so rare that this trait is shared with only five other breeds (English Bulldog, King Charles Spaniel, Miniature Schnauzer, Parson Russell Terrier, and the Rottweiler).

What Does the Breed Standard Say?

I turned to the Boston Terrier Club of America to research the breed standards which states:

“The tail is set on low, short, fine and tapering, straight or screw and must not be carried above the horizontal. (Note: The preferred tail does not exceed in length more than one-quarter the distance from set-on to hock.) Disqualify – Docked tail. Body Faults – Gaily carried tail.”

A current belief among preservation Boston Terrier breeders is that a dog with the tail described in the standard will likely have a good spine.

Photos of What A Boston Terrier’s Tail Should Look Like

The photo below is from the Boston Terrier Club of America’s website.

These two photos show what a properly set tail is and one that is a gay tail.

What Does It Mean When My Boston Terrier Has a Long Tail?

Boston Terriers have had short tails for over 125 years.

It is highly unlikely for any purebred Boston Terrier to genetically turn up with a long tail.

If your Boston Terrier has a long tail it was most likely because another breed was added to the line in the last 10 or so generations.

Back yard or puppy mill breeders appear to mix in some terrier type dogs to get a narrower skull because in doing so it allows the bitches to free whelp.

What Kind Of Tails Do My Own Boston Terriers Have?

My first Boston Terrier is in heaven and sadly I do not have a photo of her tail.

My second Boston Terrier Maggie has a short crooked tail. My favorite aspect about her tail is that she can wag it.

It tickles me to no end to see that little rudder tail moving from side to side.

My third Boston Terrier Orbit on the other hand has the shortest nub of a tail.

And it doesn’t wag.

So she makes up for it by turning into a complete wiggle butt where she moves the back half of her body from side to side when she’s happy!

Boston Terriers have a naturally short tail. They are not bobbed.

Want to learn more? Visit the Boston Terrier Club of America’s website to learn more about this beautiful breed!

Do You Love Boston Terriers?  Want to Read More?

INDOOR GAMES TO PLAY WITH A BOSTON TERRIER

RASH ADVICE FOR MY BOSTON TERRIER

I am a Boston Terrier Breed Advocate. I started this blog because there isn’t enough space to tell our story on our Instagram.

I currently have two Boston Terriers. Maggie is my socially awkward heart dog while Orbit is my affectionate  soul dog.

Diarrhea in Boston Terriers. How to Quickly Treat At Home January 3, 2021
14 Reasons Why I Love The Fi Dogs Collar For My Boston Terriers January 2, 2021
How To Decide When To Bathe Your Boston Terrier December 27, 2020
2 Comments
Leave a Reply Cancel reply