in Traveling With Dogs

Escape to Cambria with my dogs 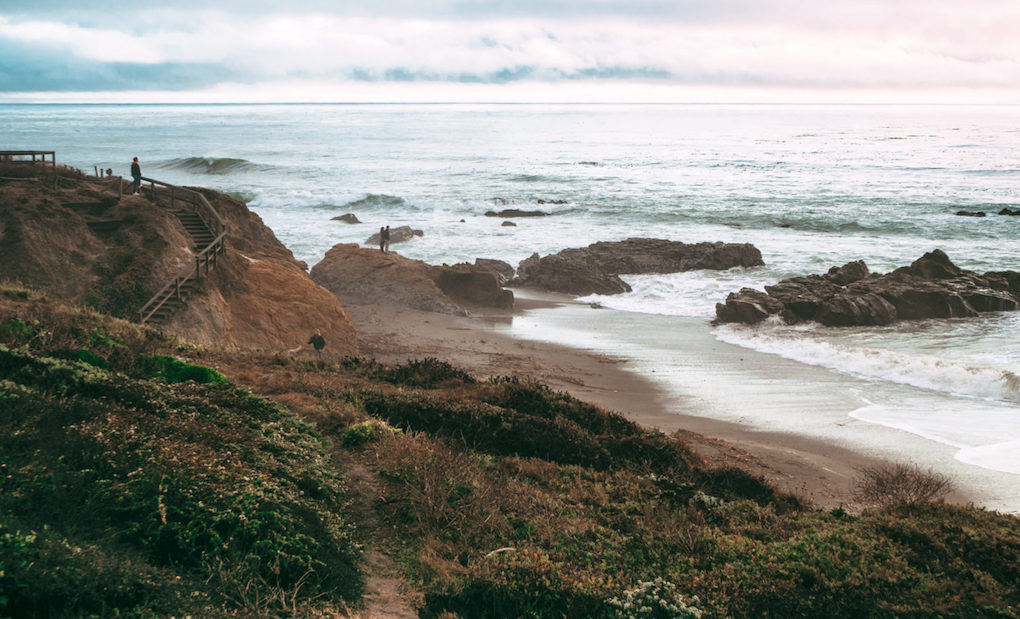 This last summer was full of activities and I admit I felt the weight of trying to do too much.  And I longed to get away.   When the chance to take a solo road trip up the coast – I immediately jumped on it.

I should rephrase – it was going to be a Solo trip + 2 puppies.  A chance to escape and a take a doggy vacation.

Typically I map out an hourly itinerary.  This time – I decided to take it slow.  And to let the trip unfold.

I packed my bags – set the GPS and me the the girls were north bound on our very first road trip together.

Cambria is about 7 hours away.  I decided to split the trip up and take multiple stops.

The first stop led us to Santa Monica. It was a bluebird day with a few puffy clouds.   We parked on the pier for a leisurely lunch.  They actually not only let you park on the pier itself but they also let pups on on too – big plus.

As dog friendly as San Diego is – they don’t let dogs on the pier at all.  So it was a treat to be able to do this with the pups.  I had clam chowder while Maggie and Orbit watched the seagulls.

After a few photos we continued our drive up the coast.

After a few hours of driving the girls were getting restless in the car and I needed a bathroom break.  I exited the freeway in Avila and lo and behold found ourselves on a off leash dog beach.

This was about halfway to Cambria (from Santa Barbara).

By this time it was getting pretty quiet on the road.  There was less traffic and there wasn’t much activity.  Had the ocean on my left and empty rolling hills on my right.

I couldn’t resist the chance to stop at Morro Bay.   It’s big volcanic rock reminded me of a scene in the Goonies.

Morro bay felt quaint.   It also felt dense … in a small town kind of way.  I could sense the town was extremely pet friendly.  Almost all the shops had doggy bowls at their entrance.

By this time it was getting later in the day.  Because it was overcast we didn’t stop for too long.  We walked the small wharf … watched s fisherman cleaning his daily catch and throwing the remains to the noisy sea lions below.

After the pups had their fill we got back in the car headed that last hour towards Cambria.

The smell of pine cones is the first to greet you

As we got closer to Cambria I rolled the windows down.  The first thing I noticed was the heavy scent of pine cones.

Cambria – exactly halfway between San Francisco and Los Angeles is surrounded by Monterrey Pines in one of such three native forests.

Isolated from its neighbors it maintains a charming seaside feel.  Less crowded than Morro Bay and Avila.  And even my memories of Carmel Beach (although that was a very long time ago).

There’s an immediate sense of calm once you arrive.

Unfortunately … or fortunately depending on which side of the weather you sit on … it was foggy by 4.

Maybe this led to the feeling of mystery.  I welcomed the fog.  I was tired from the drive and just wanted to relax and have a nice dinner.

I hadn’t researched the destination much because I wanted to experience it first hand.  It was as if the fog was softly hiding parts of the town and coastline so that I could ease into the mini vacation.

We had a very pleasant experience checking into the Fireside Inn.  In my prior career I was in the hospitality business and I immediately felt welcomed by the staff.

They say that the first touch point really sets the tone of your stay and when I commented how peaceful it was … the gentleman that check me in said…  “Cambria is good for the soul”.

Our room was complimentary from The Fireside Inn.  We had an expansive Ocean Front King Suite.  I’ve spent many years in the hotel business and I you never lose the eye for a room inspection.  It was immaculate and well maintained.

Location + cleanliness and quality of the room + staff = 5 stars from us.   Incidentally if you ever come to Cambria and stay at this property – book direct via this link.  They offer more benefits when you work with the property versus book through a third party.

Upon checking into the room the two pups decided to play a rowdy game of Bitey Face.  Sensing they had some energy to expel  I took the girls for a quick walk.

Fireside Inn is across from the north side of Moonstone Beach.  Pups are allowed on the boardwalk but not on the beach.  The reason being is the aquatic life thriving in its many tide pools.  The views were spectacular and I didn’t mind not being able to put paws on the sand.  It started to rain and I was starting to starve so I we headed out for dinner.

By this time.. it was raining.  The kind of rain that bordered between mist and rain.

As friendly as Cambria is … I only found one restaurant with a covered patio: Robins  Restaurant.

They served global cuisine – I had a tasty Malaysian Curry.  And I had the whole patio to myself.  I was the only one dining with canine companions.

I’m love waking up before the crack of dawn.  I took the two pups out for an early morning walk.  It was cold … and misty – so we bundled up and must have walked three of four miles that morning

After our walk – we ate some breakfast at the resort.  They serve a complimentary hot breakfast to all their guests.

I wanted to visit the Lighthouse about 15 miles or so north of Cambria.  You can view their LIVE CAM  HERE.

Unfortunately though they waved us away as we arrived … they closed right at noon that day.   Note to self – next time I plan on visiting to call ahead first.

Luckily for us – the Elephent Seal look out point was about 200 yards from the light house.  We spent almost a hour out there walking the boardwalk and watching the seals.  There were a lot of smells which kept my two pups busy. 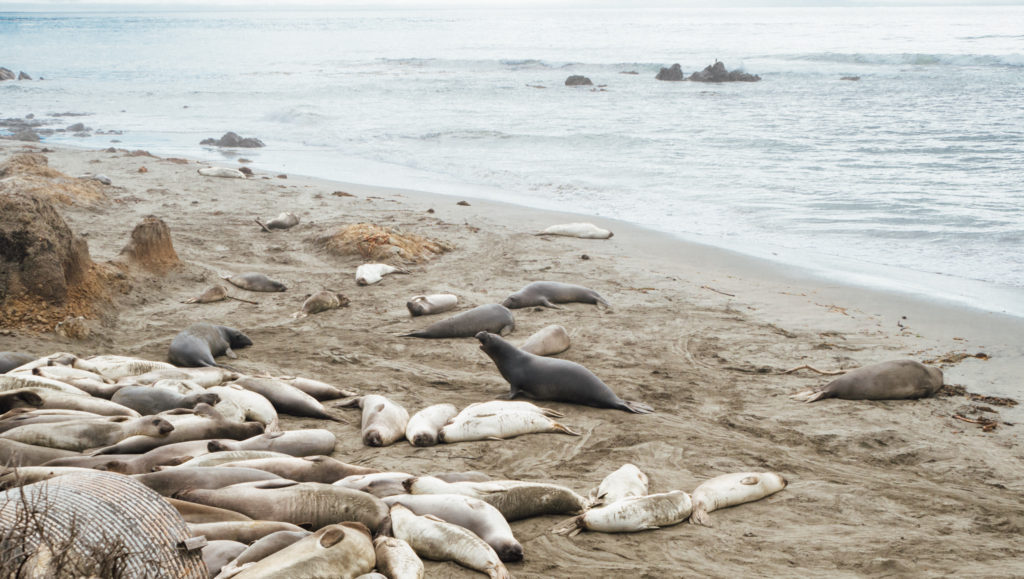 I could sense after an hour they had their fill so we went back to the resort so they could nap while I caught up on some work.

When the pups woke up – we went for a sunset walk.  When the sun went down it started to rain again.  So back to Robin’s Restaurant we went.  We were tucked in and asleep by 8:30pm that night.  That last morning – we took another long walk on Moonstone Beach to soak in Cambria one more time.

In the resort/hotel business – the true test of whether or not you won a loyal guest is if they would return.  So I ask myself… would I visit Cambria again?  You bet I would.

I missed a lot of sights due to the weather.  But I had bookmarked these attractions for the next visit.  It didn’t bother me that I was “forced to take it slow” … sometimes the universe conspires for you.

Thank you again to Fireside Inn and Pacifica Hotels for hosting us.

Just so I don’t forget … sharing with my readers the other attractions to visit:

Thank you Canada Pooch for the sweaters and Onsies and Poochcrafts for the Bandanas!