How Big Will My Boston Terrier Puppy Get? 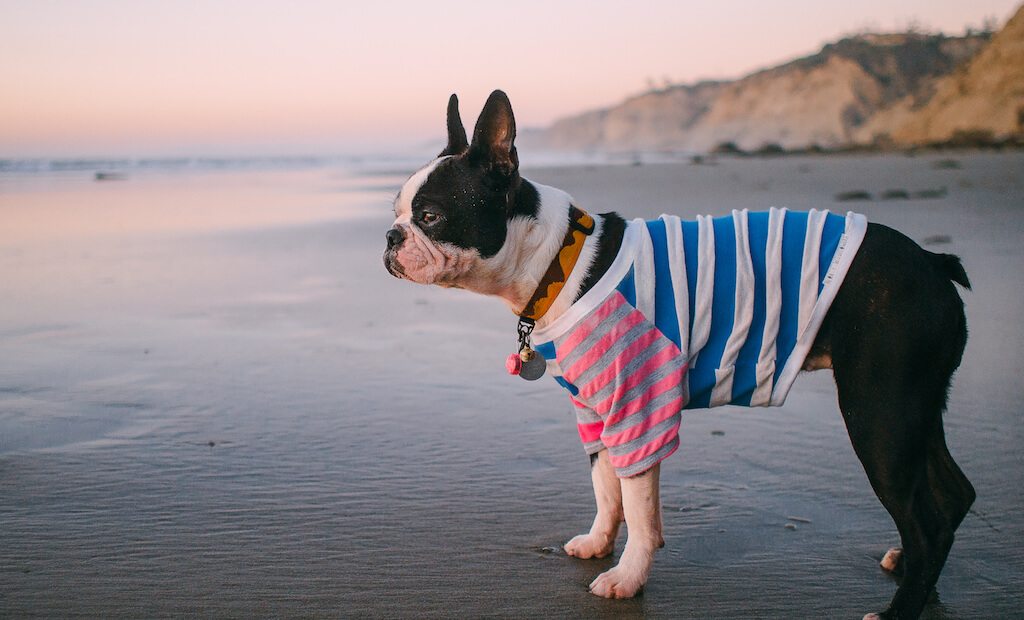 I remember looking this up almost every week when Maggie was growing up and it wasn’t until I started to talk to Orbit’s breeder and learn from other Boston Terrier Breeders that I knew how to answer this question.

So if you’re wondering how big your Boston Terrier will get? The general rule of thumb is: Take your Boston Terrier puppy’s weight at 16 weeks and double it. Add a pound for the boy. This is a general ballpark number as to what they will weigh as an adult. Keep in mind that studying the parents and their pedigrees will yield a better guess.

I took a look at Maggie and Orbit’s weight at 15 weeks and its’ VERY close.

Orbit was 8.8 pounds at 15 weeks and she weighs 17 pounds today. She could gain a few more oz but she’s so active she burns off her food.

How Big Are the Parents?

What about Online Calculators?

I’ve tried a few online calculators. One of them is puppychart(dot)com. I don’t like to link to it because it’s not a secure site. And I found it to be off by three pounds in calculating the Boston Terrier breed.

What If My Boston Terrier Puppy is Mixed With Another Breed?

This one is tough. If your Boston Terrier is mixed with a Pug or a Frenchie … the best bet would be to talk to the breeder to ascertain how big they think your puppy will be when it is fully grown.

What Does The Standard Say?

A breeder that is breeding to preserve the standard is going to breed to a specific weight class.

It would be extremely rare for a preservation breeder to breed a 12 pound Boston to a 30 pound Boston. They would be breeding dogs more closely in size.

In this case I would use the method in doubling their weight at 16 weeks to get an estimate of their adult size and weight.

At What Age Do Boston Terriers Stop Growing?

My two females – Maggie and Orbit stop growing in height … at about 12 months.

Then between 12 months and 24 months their chests started to barrel out.

At full maturity after that, their heads took on their adult maturity form. In Maggie’s case there wasn’t much of a change (she was spayed early) while in Orbit’s case, her head got just a tiny bit blockier (she was spayed after two heat cycles).

The fastest growth was between 8 to 16 weeks. Then it started to slow down because it takes another 8 months to get to their (almost) full adult stage.

They might then gain another pound as their chest barrels and gets wider but this is between one and two years of age.

How Does Spaying and Neutering Affect Growth in Boston Terriers?

Ideally you wait two heat cycles for your female Boston Terrier prior to getting her spayed + one month to let all the hormones settle down.

For the males you want to wait until they are at least 18 months to two years old before you get them neutered.

This is a more recent recommendation by those that study how dogs grow and what you’re waiting for is all of their bones to fully grown. You can read about this more in full at Whole Dog Journal

The Effects of Spaying or Neutering Too Early

Early spay and neuter affects growth because the growth plates have not fully closed.

The form of the parents will also dictate how your Boston Terrier puppy’s adult form will be.

I had Maggie fixed too early. I didn’t know that delaying her spay was an option. I had her fixed at 11 months. She didn’t have an obvious heat.

When I look at her body style she is longer legged and more rectangular than Orbit. Her mother had a longer body style but shorter legs. And her father was a champion so he had perfect form.

Orbit on the other hand was fixed after her second heat and she definitely is closer to the Boston Terrier Standard than Maggie. Her chest is big, her form is square.

Her parents are also both champions so they meet the standards set out by the Boston Terrier Club.

Photo of Maggie – longer body and legg due to an early spay as well as her mother having a longer torso.

Photo of Orbit at a year and a half

What Other Factors Can Affect Growth?

If Your Boston Terrier Puppy Has Gotten Ill

A prolonged illness may affect your puppy’s growth.

If your puppy came from a puppy mill or some other situation where they were neglected, not fed properly or mistreated this may factor into how they grow.

The best way to weigh them is at the vet’s office where they can step up onto the scale.

Did you know that most vet offices will let you come in just to weight them?

This is also a great way to socialize them to get them used to going to the vet’s office. Bring lots of treats and make it a positive visit.

Ideally your breeder will give you their best guess on how big your puppy will get.

Alternatively you can use the general rule of thumb to double their weight at 16 weeks.

If you liked this article and want to read more:

BEST SHAMPOO FOR BOSTON TERRIERS BASED ON SKIN TYPE

WHAT VEGETABLES CAN MY BOSTON TERRIER EAT TO COOL HER DOWN?

WHY I DON’T FEED KIBBLE TO MY OWN DOGS

I am a Boston Terrier Breed Advocate.  I started this blog because there isn’t enough space to tell our story on our Instagram.

My mission is to bring Boston Terrier dog parents the best, most accurate information to help your dogs live happier, healthier lives.

I have two Boston Terriers of my own. Maggie is my socially awkward heart dog while Orbit is my shadow and soul dog.

Are You A Boston Terrier Owner?  Then Join Our Facebook Group