My Boston Terrier Ate a Granola Bar with Chocolate Drizzle 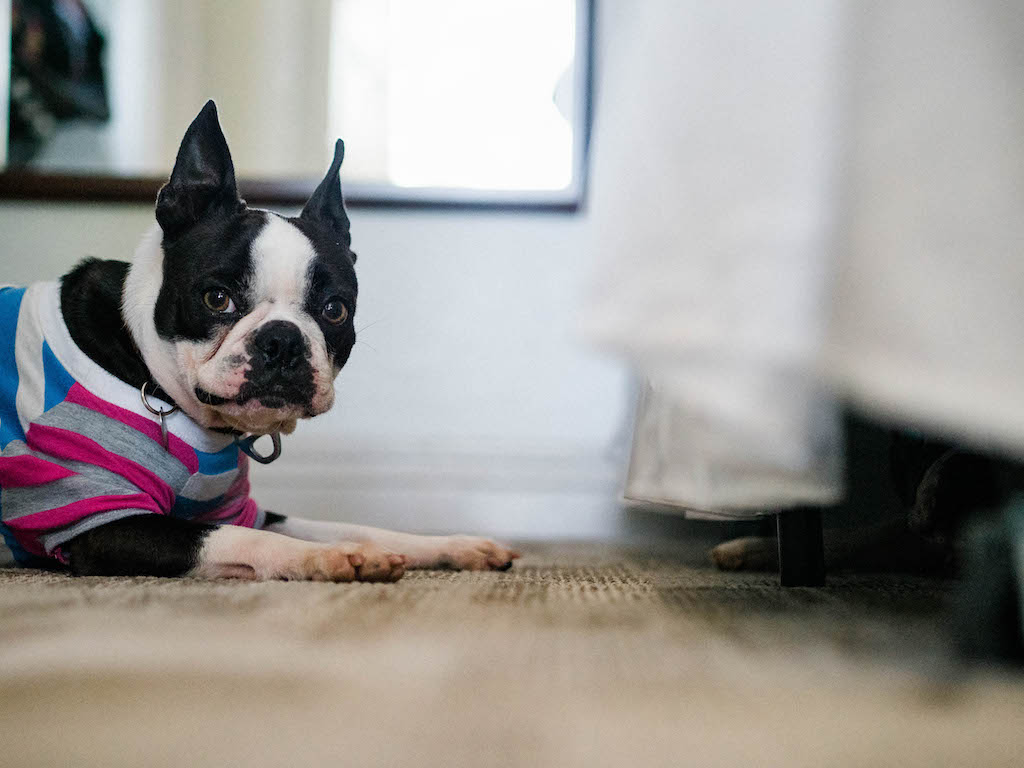 Don’t let the cute face of Orbit fool you.  If there’s food she’s going to find it.  It’s been 14 months since her last food bandit incident.  Today I was working in the office and heard a plastic wrapper rustling.  It sounded out of place so upon investigation I found Orbit sitting next to my backpack with an empty Kind Granola Bar next to her.  I immediately internally freaked out.  My dog just ate a granola bar with chocolate drizzles on it.  Did it have dark chocolate?  How much did she eat?

I calmed down … to recall that I had eaten all but a quarter of this bar.  I was saving the last part for later and we had just returned from camping so I had not finished fully unpacking.

When in doubt call your vet!

I may be a helicopter dog mom but I am done turning to the Internet for advice.  The first thing I did was to call my vet.  I explained exactly what had happened and how much of the granola bar I suspected she ate.

The vet looked up Orbit’s medical records and saw she weighed 17 pounds.  Given that the piece of granola was only about an inch in size and minimal milk chocolate she said I didn’t have to bring her into the vet’s office.

She further  assured me that it was most likely not enough to make Orbit sick.  However we did talk about the use of hydrogen peroxide to induce vomiting.  Also IF I needed to call the poison hotline it would be (888) 426 – 4435.

Which types of chocolate is poisonous to dogs?

This is the third time that Orbit has gotten into chocolate.  The first time when she was less than 6 months of age and it was Halloween.  She jumped on top of the crate to get the the halloween candy on the counter.  Luckily they were fun bars and didn’t have enough chocolate to warrant a vet visit.  She did throw up and poop chocolate the first two hours and pooped candy wrappers all week.

The second time was 14 months ago.  We were visiting over Easter in Arizona and circus Orbit found a way to jump up to bar level stool chairs to get to the easter egg candy on top of the tall dinner table.

Lessons learned that any chocolate has to be in a cupboard.

We were doing alright until this incident today but I digress.  According to Banfield’s site the severity of the side effects resulting from eating chocolate depends on the amount eaten and the size of your dog.  The following list of chocolate products is ranked from one to seven, with one being the most toxic.

How much chocolate is poisonous to your dog?

I found a calculator and for a 17 pound boston terrier found the following guidelines if one ounce is consumed:

What are the chocolate poisoning symptoms

Now after the fact watching Orbit sleep like an angel she’s not …. I thought it would be a good idea to familiarize myself with signs of chocolate poisoning

These signs can occur anywhere between half an hour to 12 after after the chocolate has been eaten by your dog.  It generally starts off with vomiting and diarrhea which will most likely smell like chocolate.  Further symptoms include increased thirst, restlessness and increased heart rate.

At its worst it will progress to:

What to do if your dog eats chocolate?

Call your vet first!  Tell them what happened.  If your dog needs to be brought in they will use activated charcoal to reduce absorption to the chocolate in the stomach.   If it’s after hours call Poison Control: (888) 426 – 4435.