Vet Visits and Medication: Carpofren (Rimadyl) Is it safe for dogs? 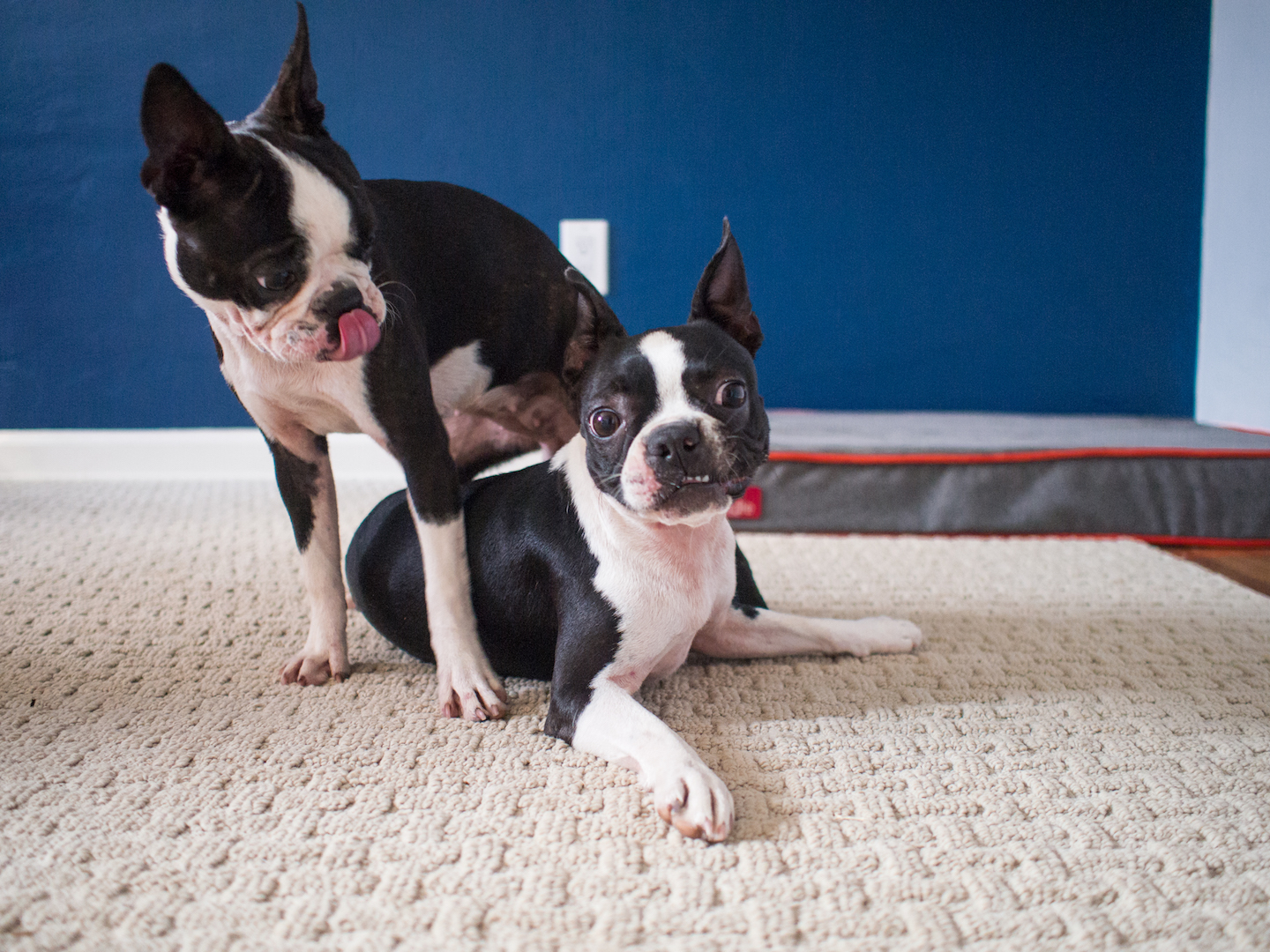 Side Effects Include Possible Death

So here’s the thing.  If ONE of the side effects of any prescribed medication is “Taking this May Cause Death”, would you take it?  Chances are no.  Or you would pause and have to heavily consider if the benefits of the drug outweigh that possibly …. you might die from it.

I’ve always made fun of the disclaimers at the end of drug commercials.  They are a 1 minute long disclosure of all the things that could possibly go wrong.  And I’m happy to know that law requires these disclosures in medication for humans.  But that’s not necessarily the case when it comes to dog medication.

I took Maggie to the vet today.  As you can see from the photos below – she looks pretty happy. 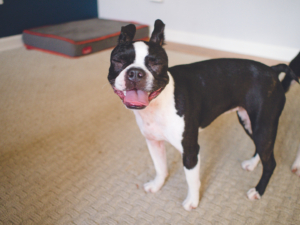 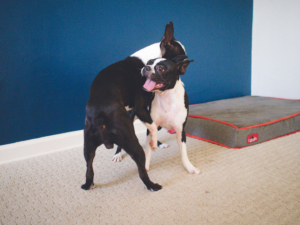 Reason for the vet visit:  Snagged nail.  I first noticed it on Sunday night.  Leading up to that evening Maggie was more quiet than usual.  Reserved.  Not running around the house like a tornado with Orbit.  I thought … well maybe Orbit’s being in heat is affecting her.

Well that night during our nightly routine of wiping them down with baby wipes, she winced when I was cleaning her right paw.  Upon further investigation her nail looked bruised.

Since her nail was still intact and firm I thought to just watch it for a day or so to see if her mood changed or if it got better or worse.

Well Monday came and the girls were back to their usual crazy self.  Running around the house and garden and playing as hard as ever.  Well maybe a little bit more than usual since Orbit was frisky (she’s in heat right now) and Maggie was responding to her spunkiness.

6pm comes around and Maggie jumps onto my lap and she’s bleeding droplets from her right most nail on her front right paw.  I promptly clean it up, apply clotting powder and hold tight till the morning.

The Vet said: She’s ok.  It’s not that bad.  Here’s a prescription for a pain killer and antibiotic.[/fusion_text][/one_full][title size=”2″ content_align=”left” style_type=”none” sep_color=”” margin_top=”” margin_bottom=”” class=”” id=””]Lesson #1: Always research the drugs being prescribed[/title][fusion_text]Ok.  I’m a bit of a helicopter dog owner.  Let me take that back.  I AM an over protective dog owner.  And I like to research things.

So I go back home and research the drugs prescribed.  The antibiotic seems harmless enough.  She needs it in case something goes awry and she gets an infection.

But the painkiller on the other had is controversial. “Most Dogs Do Well on Rimadyl, Except the Ones that Die” (source) or as another headline read “Rimadyl: Friend or Foe” (source).

Now these came up on the first pages of asking Google for side effects of these drugs.  Here’s a few bullet points:

I am not a Vet.  But I am and Consumer and I have the right to know

Iam not discounting the education and experience that vets have.  That’s why I go to them.

I guess my rant … my wish is that we were better informed.  But as I write this … I wonder if my own vet knows the risks involved with this drug.

Granted, less than 1% of dogs will respond badly to this drug.  It’s clear that this drug also has many good benefits … of which none I listed in this article.  But I do wish I was told.

Now that I replay the conversation, the Vet did say “If she has bloody stools, stop it immediately and call us”.  To which I nodded my head, thanked him, paid my bill and went home.

But somehow that statement waved a red flag.  And sure enough when I did my own research … the possible risks outweighed the benefits.

Granted.  It’s just a snagged nail.  And the Vet upon his examination confirmed it wasn’t a bad snag. And that her nail would grow back in due time.  And being that Maggie is now back to her crazy happy self … playing and running around like a gremlin … I have no cause to give her painkillers when she’s not exhibiting any symptoms of pain. 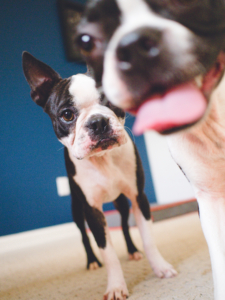 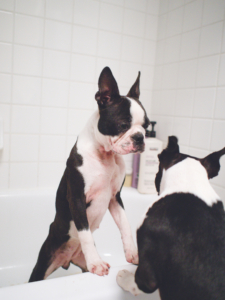 Morale of the Story: Do your own research.  Make Sure You’re Well Informed.  Talk to your Vet.  Outweigh the Risks and Benefits.

Its now a few hours since the visit.  I’ve calmed down.

Initially I spoke to my other half.  And he asked me.  Did you research this before you paid for it and talk to the Vet?  Pointing out I could have done this while I was at the clinic instead of calling him in the office to complain.

And don’t you hate it when someone points out the obvious.  Ok.  I don’t hate it.  But I just wish I thought of that earlier.

Looking back he’s right.  I could have had a more in-depth discussion while I was sitting with the Vet.  But I didn’t.  Like most people, we accept the “Take two pills and call me in the morning” approach and call it a day.

This isn’t the first time it’s happened either when we were prescribed medication we later chose not to use.  But that’s another story.  And this is all I have for today.

My point for writing this article and sharing it with you is.  As dog owners we have to educate ourselves.  Care for our dogs is a two way conversation so get involved and every time you’re prescribed a passage of care, you should be at peace with it and know it’s the best thing for your dog.  I’m not here to place blame on big pharma or my vet for their lack of knowing or… of knowing but prescribing it anyway.  All I am advocating is the one thing that you can control.

Make sure you’re informed! Information is out there.  It’s up to us to look for it and be part of the decision making process.

As for me… next time.  I’ll take the time while I’m at the Vet’s office and not wait until I come home. 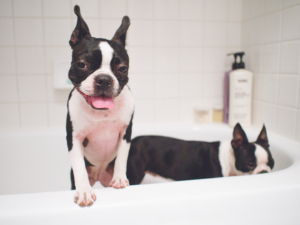 Why I Don't Feed Kibble To My Own Dogs April 7, 2020
Why Are Boston Terriers So Gassy and What Can You Do About It? March 21, 2020
Can CBD Help My Boston Terrier Dog’s Anxiety? September 2, 2019
Leave a Reply Cancel reply

Hi, we're Maggie and Orbit
We believe that life is great. And dogs make it better. We believe in making every moment count. To live inspired, active and free spirited lives as a dog family.