Why Is My Dog Running Like Something Bit Her Butt 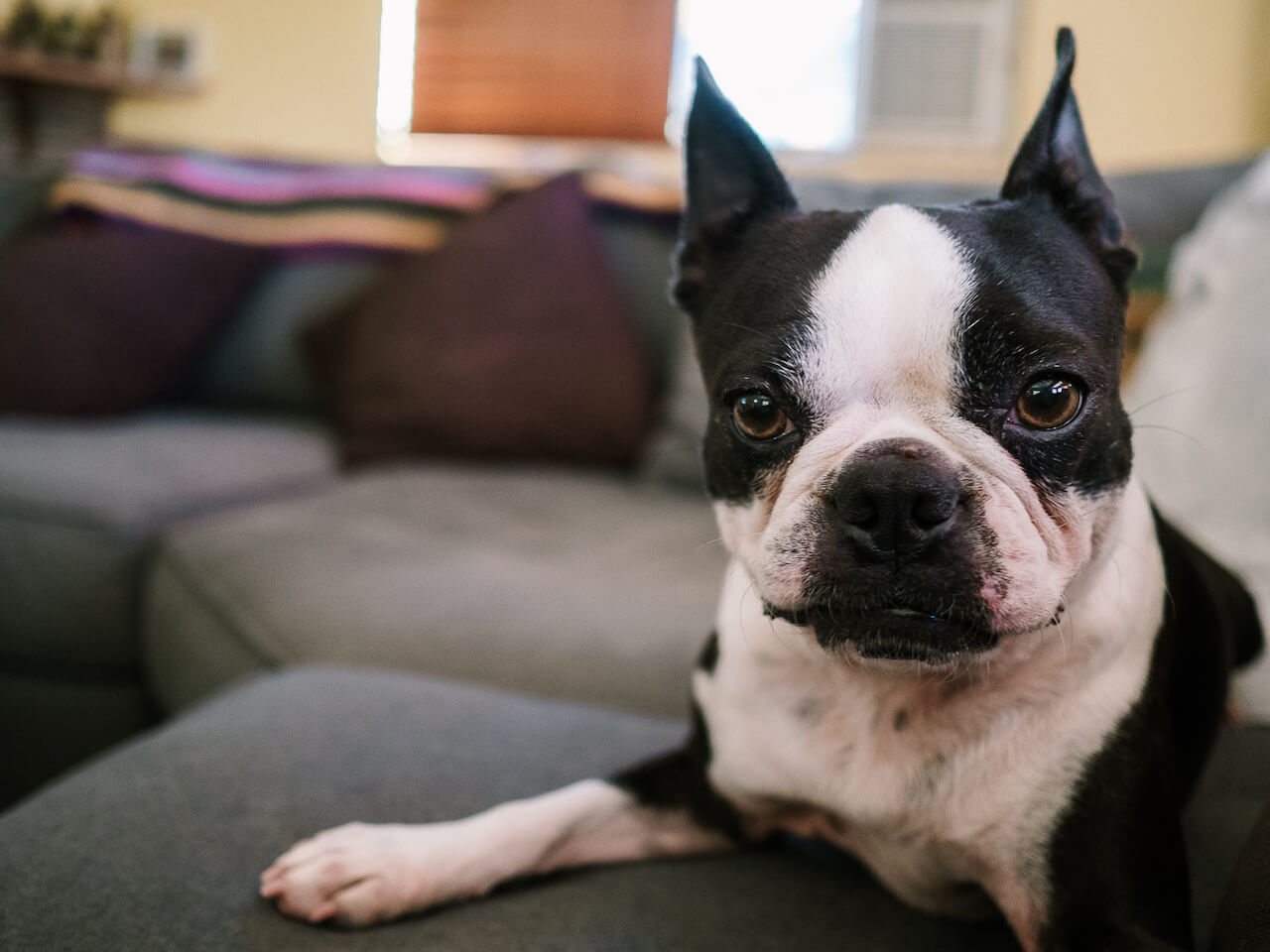 Boston Terriers are wiggly active dogs. They are known to run around wiggling their back half end and are even known to go upside down on their back waving their paws in the air without a care in the world. For the most part, this behavior is normal… except for when it’s not.

Two weeks ago, my younger Boston Terrier Orbit started to wiggle upside down more than usual as if something was itching her back. We thought it was cute, but two days later, this behavior turned more frantic.

She started to run around the house in hyperdrive as if she had the zoomies but also as if she was running away from some imaginary crab biting her butt.

She would end these sessions by very quickly and abruptly sitting down … and then looking behind her as if she was offended by whatever was there.

This would culminate with her going upside down, wiggling frantically, and then the whole cycle would repeat itself.

I went to the vet, and since then, it’s resolved itself, but the whole period caused me undue stress and puzzlement, which is why I share the story here today.

It takes a village to raise a dog, so I reached out to our Instagram community and asked them if they had ever seen this behavior from their own dogs.

Could It Be Her Spine? Or Hemivertebrae?

This breed is prone to a problem caused by the screw tail. As described on the Boston Terrier Club of America’s website:

Hemivertebrae are vertebrae that are shaped more like triangles than blocks. A more serious problem known as spina bifida involves deformities to the caudal aspect of the spinal column. The significance of these lesions can be from mild to severe.

” This defect is present at birth and genetically based, although the genetic structure appears to be a complex (multiple genes involved) interaction. Commonly referred to as “butterfly” vertebrae, hemivertebrae has its highest incidence in brachycephalic (short-muzzled), screw-tailed dog breeds. In fact, the screw-tail is actually an example of a hemivertebrae formation. This malformation may be pleasing when located in the tail but can have serious repercussions when located elsewhere in the spine. Hemivertebrae are the result of the left and right halves of vertebrae failing to fully fuse during fetal development. The resulting vertebrae resemble a butterfly when viewed from above. Each half of the hemivertebral body often grows unequally, creating a wedge-shaped (viewed vertically) body. The presence of a wedge vertebrae can cause a dorsal curvature (kyphosis) or a lateral curvature (scoliosis). Deformations in the backbone can compress the spinal cord and/or its blood supply, with serious ramifications. Symptoms indicative of hemivertebrae will be dependent upon the number of malformed discs and the locations of these discs. The best way to be assured of proper spinal formation is through x-ray evaluation by a veterinarian familiar with “proper” spinal formation for your breed.”

I reached out to Orbit’s breeder and she assured me that both of Orbit’s parent’s spines were perfect. I also learned that typically this condition become apparent by the time the puppy is nine months of age.

So it was probable that this wasn’t the case with Orbit but as you know …. Google can be a scary space when you have four days to wait until you see the vet.

She was quite clingy and needy during this time. She even woke me up one night and stayed up for three hours pawing at my hands to pet her lower back just above her tail. This seemed to relax her so I was more than happy to oblige.

The next day she continued this needy behavior. I knew I couldn’t survive another sleepless night so I gave her some STAY CALM (herbal relaxants) to keep her calm that night.

I’ve been a fan of this brand for a year now and they were also so nice to give me a discount code. Use MAGGIELOVESORBIT to get a small discount on your own purchase.

Suffice to say – it worked. We both slept through the night.

Unfortunately, her symptoms got worse. Throughout the day, the frantic zoomies continued, and it looked like she was running away from a ghost bug or ghost crab biting on her butt.

It was hard to see because her eyes were wild as if she was stressed out, and conversely, this was stressing me out.

I Tried Some CBD For Both Of Us

That weekend I found myself driving around town to look for CBD. I went to a CBD shop and a few local pet shops and settled on a CBD for her and me.

I figured with my elevated stress level, and it would be a good test to see if CBD worked to calm me down as well as monitoring her to see if she calmed down.

It was hard to assess if the CBD was working, so I’m not sharing the brands I purchased.

Finally, We Saw The Vet

We finally saw her vet on Monday, who performed a comprehensive physical. Upon inspection, she said:

Luckily she saw Orbit’s frantic wiggles while we were there. She did say that Orbit had some redness around her rear end, and she suspected it was mites.

She further explained that mites like to be as far away from the tail as possible, and she gave me two options:

On one hand I was EXTREMELY relieved her glands and her spine were fine but now I had a new dilemma and to decide on her treatment plan.

Neither of these options sounded great to me. I have both of my dogs on the natural path, and I don’t give them any flea medications because I believe the risks outweigh the reward.

But after three hours of debate with dog dad, we agreed to give Orbit one dose of Simparica.

Looking back the next time this happens I will ask for a skin scraping which wasn’t even presented as an option to me. I only learned about it from her Breeder when I checked in with her to update her on what was going on with Orbit.

DISCLOSURE: Some of the links below are affiliate links, which means that if you click on a product link, I may receive compensation. This compensation comes at no additional cost to you, and as always, I only recommend products I have tried and trust. Maggielovesorbit, Ilovebostons is a participant in the Amazon Services LLC Associates Program, an affiliate advertising program designed to provide a means for sites to earn advertising fees by advertising and linking to Amazon.com.

I did take a flashlight to her rear end to inspect her tail, and I did see a red dot at the 2 pm mark on her tail. So she probably was bit, and the itch was probably what was bothering her.

I also washed her with my favorite natural shampoo and gave her a probiotic rinse. The probiotic rinse is to give her skin microbiome healthy bacteria to feed on.

By Saturday of that week, she was better and back to her usual self. She would still wiggle upside down once or twice a day instead of frantically zooming around and going upside down 30 times a day.

Life is Back To Normal … with CBD

There is nothing more stressful than imagining your dog in pain and not knowing what the cause might be.

I am also because more curious about CBD (sourced from hemp) for both Orbit and for me.

During this period, I tried three different brands, and currently, I’m enjoying the brand from Canna of Eden.

This company was referred to me by the owner on Instagram. I trust her judgment and so far, I’ve been more even-tempered being on the human version of it.  I’m only a week into trialing it but expect more from me on this product in the weeks to come.

When your dog starts to act out of character and run around like something bit them in the butt, it’s probably a condition that affects that area.

In case where your dog is acting out of character and looking stressed out it’s key to see your vet for a professional opinion.

Please note that this article is not meant to replace medical advice. If your dog is uncomfortable and acting out of character, you need to see your vet at your earliest opportunity.

ARE YOU A BOSTON TERRIER OWNER?  THEN JOIN THIS FACEBOOK GROUP

Hello, my name is Hannah, and learning about Boston Terriers and canine nutrition has become my life’s work.

First and foremost I am a dog owner, a Boston Terrier breed enthusiast, and a seeker of the truth.

As a certified Canine Nutritionist, I turn to food to keep my dogs vibrant and healthy and prefer to raise them and myself naturally.

I started this blog because there isn’t enough space to write on our Instagram.

My mission is to equip Boston Terrier owners and dog owners alike with the knowledge I have so that your dog will live a longer life and better health.

I have two dogs.  Maggie is my socially awkward one; which I find highly relatable because I am completely out of place in large groups myself.  And Orbit is the freebird. She used to have terrible allergies but since she started eating fresh food she’s been symptom-free.

Why Does My Boston Terrier Like To Sleep Under Blankets? November 19, 2021
How Much Do Boston Terrier Puppies Cost? October 13, 2021
Feed Omega-3 To Protect Your Dog From Cancer October 7, 2021
Leave a Reply Cancel reply